You will be introduced to the Day of the Dead festival to start a clay or plaster task. You may research other cultural examples for inspiration (e.g. African, Mayan, Maori, Olmec, Aztec, Tlingit, tiki, Sepik, Aboriginal, Asian, Celtic/Norse, etc.) You will create designs based on style and symbolism of your chosen cultural group to display concept (sculptural works may be a synthesis of more than one complimentary influence eg. the Day of the Dead and Australian Aboriginal Art).

Purpose:
(What is being assessed)

How have artists looked at death and skulls through out history? 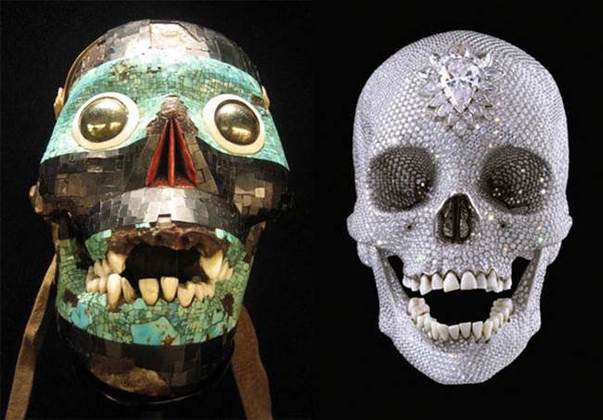 ﻿Right: Aztec skull, mosaicked with turquoise.  Left: Damien Hirst, For the Love of God, diamond coated skull, 2007
﻿﻿What do you think Hirst was trying to say by covering a skull with diamonds?

Are there any similarities or differences?


Death is something that everyone has in common, no matter where you are in the world. However, there have been differences in the way that death has been portrayed.

In the Victorian era (1837 - 1901), death was considered a 'normal thing.' Many people died during childhood. Why do you think there were high mortality rates back then?

What we consider as an unusual or morbid tradition developed during this time. Photographs were not as common during this time and many people did not have a photograph, especially when they were young. In order to remember loved ones who passed away, photographs were sometimes taken after death. They were dressed nicely and positioned in a way as though they were still alive.

Another take on death was during periods of war. Many artists portrayed scenes of war from the front lines, while other painted the 'behind the scenes.' Others still like Dada and the Surrealists portrayed the psychological effects after the war.
For many death is something that people find intriguing. It is the unknown and mystery surrounds it.

﻿For our task we will be looking at a Latin American perspective on death.

Day of the Dead

Read the article below and highlight the key learning points to help you form a definition.

What are the key points about the festival and the artwork? Write 5-8 sentences. Use the photos to help you generate an answer.

The Day of the Dead Article:

The most familiar symbol of Dia de los Muertos may be the calacas and calaveras (skeletons and skulls), which appear everywhere during the holiday: in candied sweets, as parade masks, as dolls. Calacas and calaveras are almost always portrayed as enjoying life, often in fancy clothes and entertaining situations.

Catholicism
Noun
type of Christian religion loyal to the Roman Catholic Church and the leader of that church, the Pope.
​
conquistador
Noun
Spanish explorer or conqueror of Latin America in the 16th century.

Dia de los Muertos
Noun
(Day of the Dead) holiday honouring deceased family and friends, celebrated on November 1 and November 2 in Mexico and throughout Latin America.

indigenous
Adjective
native to or characteristic of a specific place.

originate
Verb
to begin or start.
​
ritual
Noun
series of customs or procedures for a ceremony, often religious. 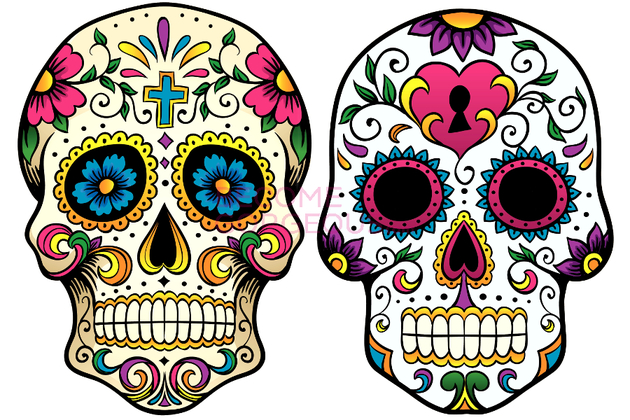 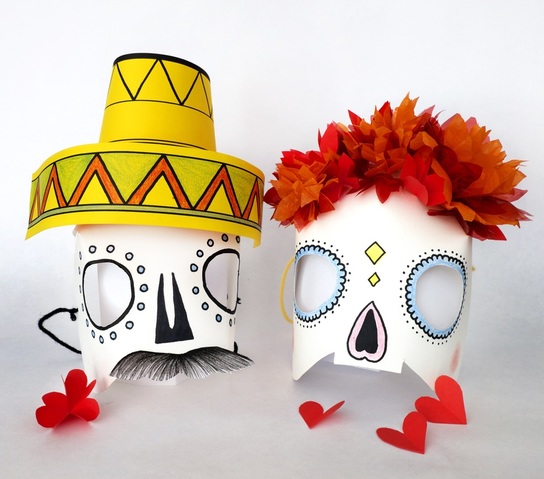 Paper masks that I made for the Womad Music Festival as a workshop for children.

If you finish early or are waiting for something to dry, work on an extension task using the link below.
Extension Tasks