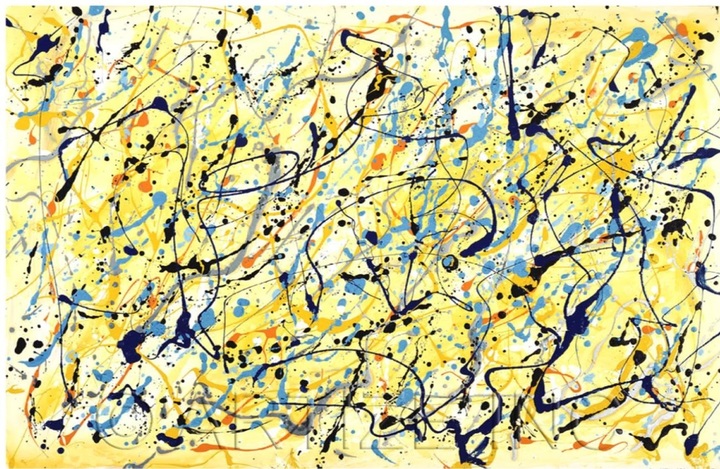 Jackson Pollock
Abstract expressionism was an art movement of the 1940s. Rather than creating realistic images, the artists were focusing on the composition of colours and shapes. The process involved of making an artwork became important, something which hadn't been a focus previously. In the image above, Pollock created 'action paintings.' He used a lot of movement, using his whole arm, swishing it across the canvas. This movement and action is mirrored in the end product.

Surrealism is an art movement on the 1920s, before Abstract Expressionism. After World War 11 people were suffering from the atrocities that they had witnessed. The Surrealist artists were interested in exploring the psychological effects from the War. They looked at the subconscious and dreams to inform their work.

Where would you expect to see any of the scenes from the artworks above? 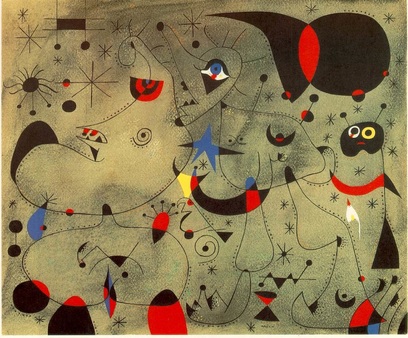 Joan Miro, Nocturne
Miro is a Surrealist artist. He looked strongly at the idea of automatism. Automatism is where you allow you mind and body to take over when creating an artwork. It isn't about planning the work, but rather allowing it to evolve naturally by not controlling the outcome.
In Miro's work you can see the link to Abstract art to happen later in the 40s. Our task will be to create abstract creatures. You can see that Miro 'doodled' lines and shapes on the canvas before turning them into characters.

For this task, let go of control and experiment!

Create a whole range of different blobs. Don't try to make them into something, be completely free with how you apply your paint to the page. You can try both watercolour and/or acrylic paint. Try blotting the paint onto paper, blowing it around, swirling it and splattering it. Try folding your page in half to create symmetrical designs, like the rorschach ink blots used by psychologists. Create about 7-8 page of abstract experiments with different media. Try giving the rorschach technique a go. 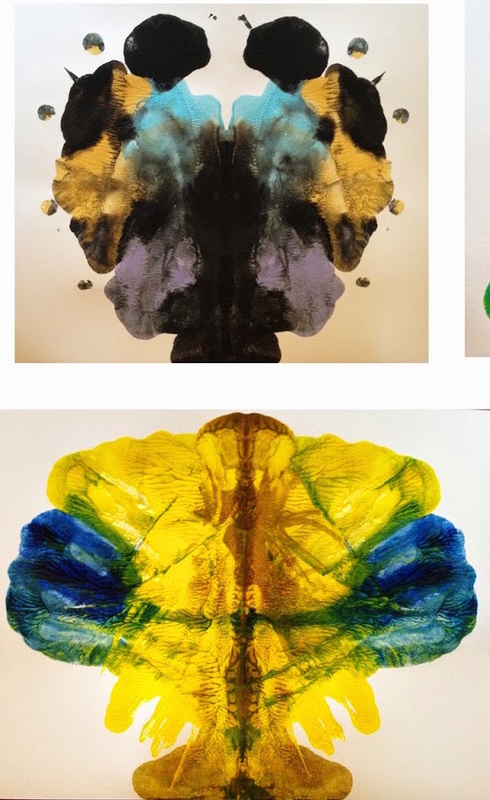 The rorschach (pronounced roar-shack) ink blots tests are a technique used in psychology that was created by Hermann Rorschach. The patient is presented with an ink blot and they need to say what they can see within the ink. The aim of the test is to read into the thoughts of the patient by analysing the results. Originally the test was used to diagnose patients with schizophrenia (an illness that affects the normal functioning of the brain, interfering with a person’s ability to think, feel and act), but in more current times it is also used as a personality test.
We too are going to play around with this idea of seeing images within the paint that has been randomly placed on the paper (Unlike our ink blots, Rorschach's were designed, not random).  Then we will create the characters and creatures from our imagination. 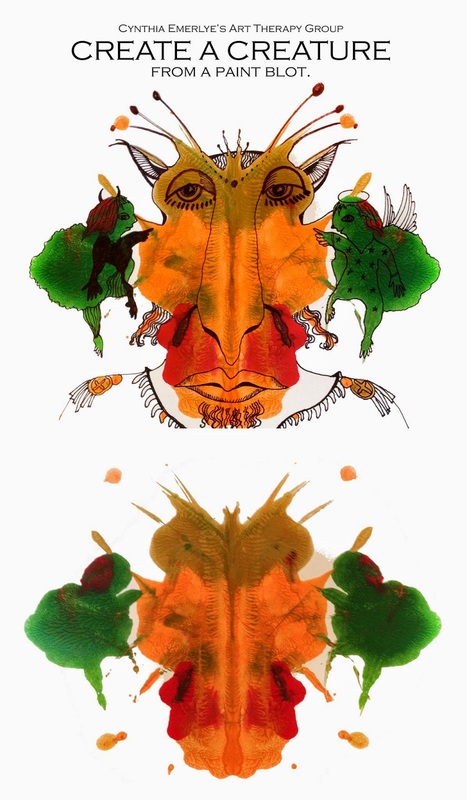 For an experiment like this, the artist has used acrylic paint, blotted some colours on to paper and then folded the paper in half. This has squished the paint, creating organic shapes. Can you see something different in this paint blot than what the artist, Cynthia Emerlye  has turned it into?
Part 2:

Just like the surrealist artists you can try drawing from your imagination and subconscious. Some people may find this challenging. Turn your abstract images into something that belongs in your imagination, such as: creatures, mythological monsters, animals, people or something supernatural. Anything from the mind or subconscious. 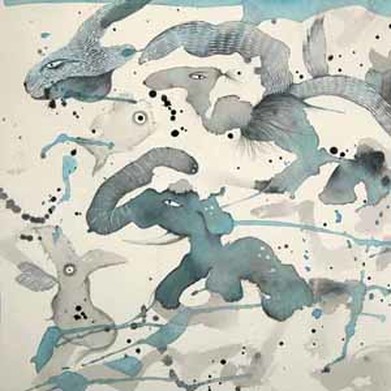 See in this example, the artist Carla Sonheim, has made a range of brushstrokes and splattering across the page. She has then used her imagination to turn these strokes into quirky animal characters. This was done using the medium of watercolour paint.

This time she has changed the blobs and added other colours on top to create more refined characters. Which do you prefer? What are the differences and similarities between the top 'brushstroke style' and the more refined example below?

Now scroll back up the page to the 2 rorschach folded paint examples. What creatures could you turn these paint blots into?
While waiting for your paint to dry:
Draw a range of facial features that can be used on your blot later. Have the blot in front of you for inspiration. The examples in the image below are human, but remember you can adjust these to suit animals and creatures. 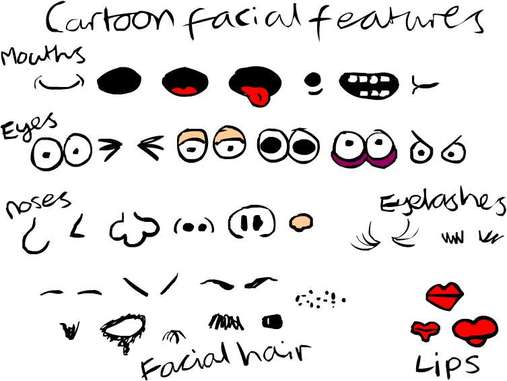 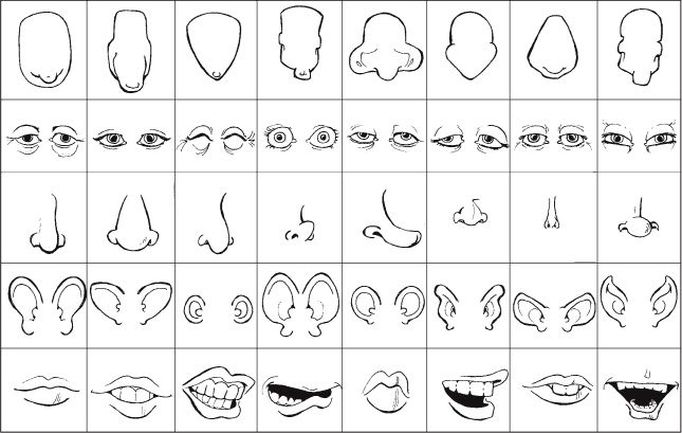 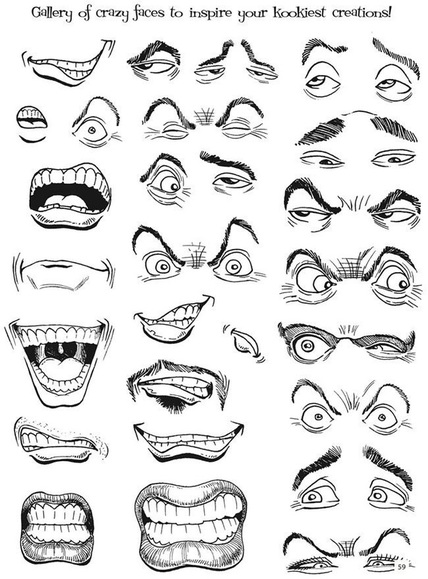